Temecula, Calif. – May 25, 2019 – Hosting its third grand prix of the four-week series, the Temecula Valley National Horse Show resumed Saturday at Galway Downs with competitors coming out in large numbers to test their skills in the titular event of the week, the $40,000 MediVet Equine National Grand Prix. Held in the Audi Grand Prix Arena, presented by Evergate Stables, the class featured 33 partnerships eager for victory, with John Pearce adding yet another victory to his trophy case in Temecula, as he and Firestone S overcame the field as the swiftest double-clean pair to secure the greatest stake of the prize money. As the best-performing rider under the age of 25, Alex Volpi navigated Foster 39 to first prize in the $1,000 U25 Jumper Classic, and Sarah Invicta Williams-Echols and Foxxy captured the blue ribbon in the $10,000 Voltaire Design 1.35m Speed Classic.

In the $40,000 MediVet Equine National Grand Prix, the first round course, designed by Anderson Lima (BRA), consisted of 15 efforts at heights of 1.40m and 1.45m to test the pack of contenders from five countries, with the 75-second time-allowed proving tough to attain for a number of entries. Third to ride in the initial order, Susan Artes and Laurence Z served as the first successful pathfinders, with Olympic champion Will Simpson and Whoop De Doo immediately forcing a jump-off as the second team with a fault-free effort. Also advancing to the second round of riding, Lindsay Archer with the reins on Jarpur, Chenoa Mcelvain riding Wallstreet RC, Volpi and Foster 39 and Pearce aboard Firestone S each added their names to the list of returners to keep themselves in contention for the top prize.

The abridged 8-fence jump-off track saw six eligible horse-and-rider combinations return to the ring in reverse order of the sequence in which they qualified. First to tackle the jump-off pattern, Artes directed Laurence Z to a quick and clean round in 39.175 seconds to set the pace, but were quickly overtaken by the always-speedy Simpson and Whoop De Doo, who tripped the timers in 37.592 seconds with all the rails still up. Nearly matching the leading pair, Archer and Jarpur put in an almost identical time of 37.594 seconds, but downed one rail to incur 4 faults against them. The only junior rider earning a spot in the jump-off, Volpi jockeyed her own Foster 39 to an impressive performance as the duo sliced across the ring, surpassing all the earlier competition with their clear time of 37.424 seconds to propel to the top spot with only one challenger left to go.

Closing out the night as the final exhibitor, Pearce left nothing to chance, galloping Nicole Teague’s Firestone S at full tilt in an attempt to go for the gold, crossing the finish line with all the obstacles intact in 36.865 seconds to put them at the top of the leaderboard and secure first place in the $40,000 MediVet Equine National Grand Prix. Pearce’s win with Firestone S is a welcome addition to his growing collection, having also earned the lead spot in classes such as the $10,000 Cypress Point Stables 1.40m Jumpers and the $7,500 Interactive Mortgage 10 & Under Futurity Classic aboard multiple horses over the course of the past two weeks. Closing out Saturday’s highlight class just behind Pearce and Firestone S, Volpi and Foster 39 claimed the runner-up position, while Simpson and Coxe Horses, LLC’s Whoop De Doo rounded out the top three in the rankings.

Run concurrently with the grand prix, the $1,000 U25 Jumper Classic offered younger equestrians under the age of 25 the opportunity to gain valuable experience at the upper level of the sport, while also allowing them to battle it out with some of the best horse-and-rider pairs for a shot at the overall $40,000 grand prix purse. Already with back-to-back wins under her belt in the class, Sloan Elmassian was the woman to beat, and Volpi was able to successfully eclipse the two-time winner to claim the top honors in the $1,000 U25 Jumper Classic thanks to her solid performances aboard Foster 39, finishing in second position overall in the $40,000 MediVet Equine Grand Prix.

Preceding the feature class of the evening, the $10,000 Voltaire Design 1.35m Speed Classic was won by Sarah Invicta Williams-Echols and Invicta Farms, Inc.’s Foxxy, who captured the victory as the quickest and most careful duo during the faults-converted competition. Of the 35 starters, 15 pair managed to leave all the rails in the cups, although a number incurred time faults to add to their cumulative tallies. Early in the order, veteran Mandy Porter piloted Whitney Strachan’s Centstar to a blazing foot-perfect time of 58.249 seconds, which looked to prove unbeatable, but ultimately fell to just two fellow challengers. Owner-rider Karen Vanderburgh and B-Cleo narrowly edged out Porter with their fault-free time of 57.589 seconds, and Williams-Echols and Foxxy overtook out the leaders by an even narrower margin to come out on top in a clear time of 57.232 seconds, with Vanderburgh and Porter finishing in second and third positions, respectively.

The Temecula Valley National Horse Show II will conclude Sunday, with weekly show jumping competition finishing with a series of jumper classics for junior and amateur-owner riders, each riding for the greatest stake of the prize money. On his reaction to winning:
“It was a very exciting jump-off; I’m thrilled. I’m just thrilled with my horse every day. I haven’t had him that long and every day I’m getting more and more connected with him. He is really loving my ride and getting more and more careful and faster in the jump-off, so I couldn’t be happier with the way my horse jumped today. It’s just not possible – we were so together today and it was great, a really good feeling. Thank you very much to MediVet for their sponsorship and to Anderson Lima for his terrific course design once again. It made the whole event just about perfect.”

On his success at the Temecula Valley National Horse Show:
“Seven Seas, this was his inaugural grand prix today. He had a couple down but it was his first grand prix and I was extremely happy with him today. I think he has a bright, bright future. Chantico has won a lot of the speed events, and that is his forte. I couldn’t be happier with the last two weeks I’ve had, for sure.”

On his strategy for the jump-off:
“It’s always an advantage to be last. I made it a point to watch Will Simpson. He was second in the jump-off, and he is a great competitor. I watched him go and watched what he did, and he told me exactly what I needed to do. That was an advantage going last. All of us were very close. We were all in the same hundredths of a second practically, so it was a really good jump-off. It was fast, and I just had a great day.”

On Foster 39:
“I got Foster last September. We imported him and ever since then he’s been helping me go up from the high juniors to more of the grand prix and 1.50m classes, and hopefully at the end of the year we will be moving into World Cup Qualifier classes. He is awesome; he’s so honest and tries so hard for me, and I am very grateful.”

On the course:
“In the first round, he is so experienced so I knew if I didn’t mess it up he wouldn’t mess up and that’s all I can do. I came a little quiet into the triple combination and he stretched for me. Coming into the second round, when I am going up against a bunch of professionals I don’t really care about winning it, I just want to have a good round and give my horse a nice ride. He was a little excited coming into the second round and he started bucking after the first jump, which I think may have lost me a little time but I just tried to keep it tidy and I ended up really well.”

On the course:
“It was a really nice course, and I think it wasn’t set too insanely difficult. I know there is a big crowd that comes to Temecula and some are experienced and some are not, and as an inexperienced grand prix rider I am thankful for courses where I walk in and don’t think, ‘Oh god I am not going to make it around this.’ I think the jump-off was really good, as it was a combination of moving up and running a little bit, and then tidy turns, as well. I always like it when they are mixed instead of just being running or tidy turns.”

On Foxxy:
“I’ve had her just under a year, and she came from Andy Kocher. She is a competitor. If she could speak, I think she would walk into the ring and say, ‘Who do I need to beat?’ I’ve said that all along since the day I started riding her. She walks into the ring, surveys the situation and is on it. If I can stay out of her way, she likes to win.”

On the course:
“I thought the course was very inviting, and there were definitely some options, which was nice to have in a speed class. I’m just dusting off some cobwebs because I had a pretty bad accident two years ago and then my grand prix horse died less than a year ago, so we have just been rebuilding a little bit and this is actually only my second horse show this year. I have a barn in New Mexico, and Mandy Porter has been nice enough to help me here. I went in with a plan and just stuck to it.”

On competing at the Temecula Valley National Horse Show:
“My mom is originally from California and I have not shown in California in about six years. I’ve been friends with Ali [Nilforushan] for many, many years, and I just kept reading about the show and all its wonderful reviews. Last year went so well and the Premier week they added was lovely. I really wanted to come out and support Ali and Francie [Nilforushan] and really make a go of it. We are planning on coming out next year with a full barn. We really enjoy it. It has been nothing of praise and good experiences here from the office staff to security to the management. Everybody has just been delightful.” 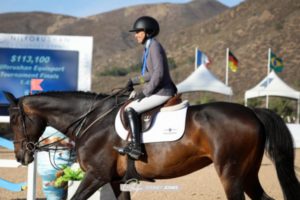