West Palm Beach, Fla. – Dec. 27, 2019 – Founded with the vision to enable all equestrians to express their potential, French sport saddle designer Voltaire Design has undergone an incredible ten years of growth and innovation since its inception in 2010. In 2020, the brand will celebrate its 10th anniversary, a significant milestone for a company that began in a garage in the south of France and has since become one of the United States’ largest premium sport saddle makers thanks to a bold innovation strategy. Trusted by a high-profile roster of supporters, Voltaire Design possesses a unique history and shared values that have allowed it to thrive and serve the competitive equestrian community at the highest level.

Originally a company of only four individuals who each brought their own strengths to the business, Voltaire Design was co-founded by “The Entrepreneur” Brice Goguet, “The Master-Sellier” Olivier Poychicot, “The Designer” Géraldine Gilmas and “The Administrator” Claude Mode in 2010. At that time, the troupe officially opened Voltaire Design in its first workshop in a garage in Espelette, France, and soon launched its re-invented saddle on the American market. Since the very beginning, the team behind Voltaire Design has placed the greatest emphasis on innovation and modernity, and their saddles have been recognized for their lightness, high technicality and unique style. Due to this, the brand has expanded in only ten years to become a market leader in the U.S. and England, with sights set on France and Germany, as well. 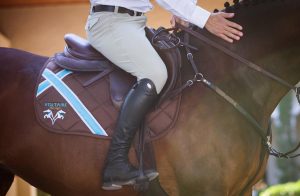 “The growth of Voltaire Design is a consequence of a permanent desire for innovation. It is through our team’s alliance of craftsmanship and technological innovation, the hallmark of our group, that we have achieved this level of success in our first ten years,” commented Goguet, President of Voltaire Design. “Thinking back on our humble but committed beginnings, it is amazing to see how much we have grown in terms of our own team as well as our supporters. Given the excitement of our first decade, I can’t wait to see what happens in our next ten years.”

Since its earliest days, Voltaire Design was dedicated to the creation of a new type of custom saddle for equestrian athletes. In only one year of operation, the team built such an incredible product that two-time World Champion and Olympic medalist Beezie Madden signed on as the first major rider to commit to Voltaire Design in 2011. Since then, she has been joined by the likes of world No. 1 eventer Oliver Townend, top-ranked show jumpers like Daniel Coyle, Rowan Willis, Erynn Ballard, European Champion Shane Sweetnam, Amanda Derbyshire, and accomplished hunter riders like Amanda Steege, Patricia Griffith and Jennifer Alfano.

With innovation always at its core, Voltaire Design further redesigned their product in 2019 by implementing advances made by it’s dedicated research and development team, propelling saddlery into the 3.0 era with the Blue Infinite. Thirty percent lighter thanks to its alloy composite material, the Blue Infinite’s highlights include the patent-pending ActiveFlex tree, developed by Voltaire’s engineers, as well as a seamless and invisible integration of the electronic components. With partner Seaver, Voltaire Design created a saddle that provides meaningful data for professionals and amateurs in order to better understand their horses and ultimately contribute to heightened performance. “When we created Voltaire Design, we were convinced that we could bring more to the rider and the horse both in terms of quality of service and products. I’m thrilled to say that I believe we have met that goal, but our work is never done. We must continually strive to be better through our work, and I am proud that our team comes up with new ideas all the time that will continue to add to this industry,” noted Goguet. “Perhaps the greatest assets we have built at Voltaire Design are not just our saddles, but our growing team that all participate in a shared vision. I thank our team and all of our supporters for their long-time dedication to our cause, and I look forward to entering the new decade with even more ideas to share with them.” Internally, Voltaire Design has grown in numbers, now up to nearly 200 employees, but has remained true to its original values and has expanded upon its company mission. Passionate about perfection and performance, the entire brand is committed to bettering the community and social responsibility is a key facet of the strategy. In addition to production in the most environmentally-friendly way possible, the team also participates in the campaign to plant a billion trees, a global effort implemented by the United Nations Program for Environment. For every new saddle purchased, a tree is planted. A dynamic workplace for its valued employees, Voltaire Design is a forward-thinking company that constantly strives to remain sensitive to the demand for expertise in an evolving environment and recruits hires based on creative thinking and a willingness to learn.

As Voltaire design heads into its 10th Anniversary in 2020, the company will celebrate with festivities in early January in West Palm Beach, Fla. at the Norton Museum of Art, a venue that aligns with Voltaire Design’s dedication to creation. As the company ushers in its next era, it will commemorate its growth beside its long list of loyal riders and supporters, each of whom contribute to Voltaire Design’s continued growth. Subsequent events will follow throughout the year to continue to celebrate the brand and its connections, making for a memorable 2020.